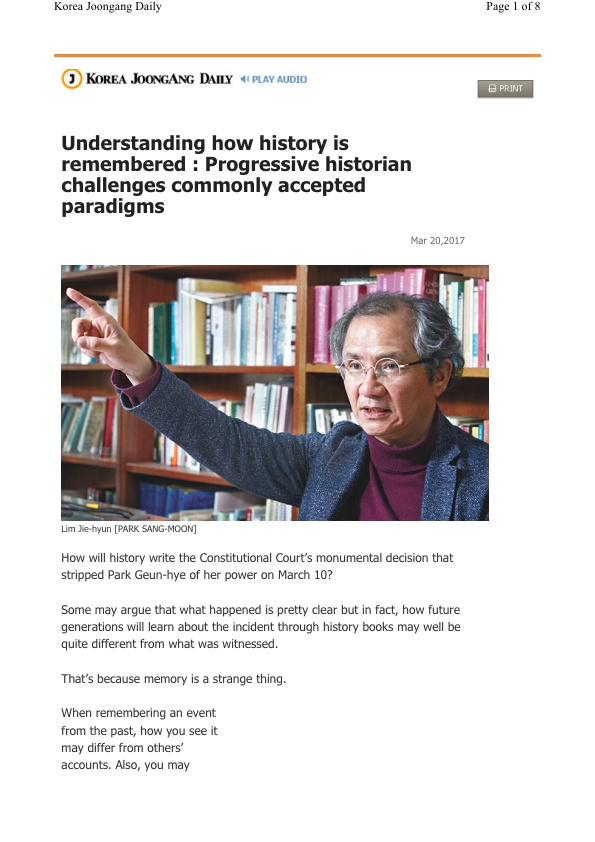 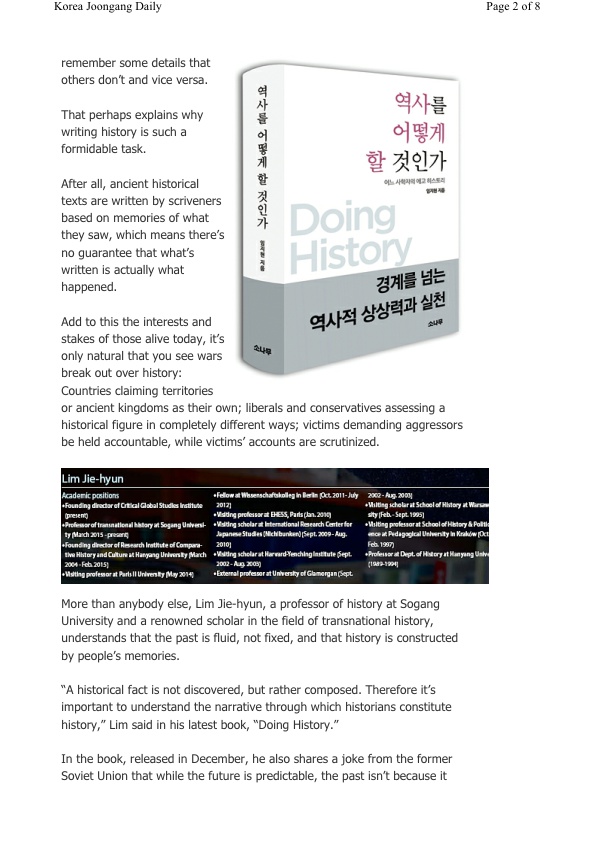 How will history write the Constitutional Court’s monumental decision that stripped Park Geun-hye of her power on March 10?

Some may argue that what happened is pretty clear but in fact, how future generations will learn about the incident through history books may well be quite different from what was witnessed.

That’s because memory is a strange thing.

When remembering an event from the past, how you see it may differ from others’ accounts. Also, you may remember some details that others don’t and vice versa.

That perhaps explains why writing history is such a formidable task.

After all, ancient historical texts are written by scriveners based on memories of what they saw, which means there’s no guarantee that what’s written is actually what happened.

Add to this the interests and stakes of those alive today, it’s only natural that you see wars break out over history: Countries claiming territories or ancient kingdoms as their own; liberals and conservatives assessing a historical figure in completely different ways; victims demanding aggressors be held accountable, while victims’ accounts are scrutinized.

More than anybody else, Lim Jie-hyun, a professor of history at Sogang University and a renowned scholar in the field of transnational history, understands that the past is fluid, not fixed, and that history is constructed by people’s memories.

“A historical fact is not discovered, but rather composed. Therefore it’s important to understand the narrative through which historians constitute history,” Lim said in his latest book, “Doing History.”

In the book, released in December, he also shares a joke from the former Soviet Union that while the future is predictable, the past isn’t because it continues to change.

Lim also says there is intellectual memory, which is gained from learning and matches with historical facts; and deep memory in a person who went through a traumatic experience. Deep memory may contradict historical facts because of the psychological trauma the person suffered. But he says that doesn’t make deep memory any less true.

“A historian should be able to listen to witnesses’ ‘deep memories’ even though they may go against historical facts,” he said.

That is why the 58-year-old - who began as a historian in the field of Western Studies and then transnational studies - is now seeking to be a “memory activist.”

“Historians’ work is forming a social memory of the past and in that sense whether they want or not they are somewhat memory activists,” he said.

Lim studied Marxism in the 1980s. After the 1950-53 Korean War, anti-Communist sentiment dominated South Korea for a long time. And in the 1970s, military dictatorship gave little academic freedom, particularly to those studying socialism. That’s why he recalls that he was “lucky.”

In the 1990s, he went to Poland to expand his understanding of socialism, only to witness the paradox in which the people there believe socialism is the ideology that oppresses the laborers and therefore the socialists there are considered the conservative and anti-Communists the liberals.

However, his experience in Poland - considered one of the European countries where nationalism is the strongest, similar to Korea - helped him to understand how histories of different countries interact with one another and eventually all intertwine together to be part of a transnational history. In other words, the problems of Korean society are the problems of the world.

After coming back to Korea in 1997, he’s presented many progressive and even controversial paradigms on nationalism; national history; dictatorship and the public; and victimhood and nationalism. He authored books like “Beyond Nationalism” (1999), “Reading Everyday Fascism” (2000) and “Antagonistic Complicity of Nationalisms” (2005).

Korean society - academia particularly - was rattled at Lim’s then-bold argument that there is such a thing as bad nationalism, as political authority and nationalism share a common thread; fascist practices within those liberal activists who fought against dictatorship; and even publicly-endorsed dictatorship. Many Koreans believed “the people” were either innocent victims or righteous fighters, and nationalism in that sense was sacred territory.

Lim’s argument that the history of Goguryeo (37 B.C.-A.D. 668), a kingdom that Korea has long believed to be its history, is neither Korea’s nor China’s but Goguryeo’s, also caused controversy. Since the early 2000s, China has strengthened its history project which attempts to include all events that once occurred in present-day China into a part of China’s national history. Under this theory, Goguryeo is China’s history. Lim, however, argues that applying the present-day border line into ancient history is the wrong approach to begin with.

Lim’s grandfather, he later learned in his sophomore year as a history major, was Lim Won-geun (1899-1963). The renowned socialist activist studied economics at today’s Keio University. After the March 1 Independence Movement in 1919, he went to Shanghai and established the Joseon Communist Party with two other socialist activists - Park Heon-yeong and Kim Dan-a. Lim Won-geun also worked for the Joseon Joongang Ilbo, the liberal newspaper founded by famous independence fighter Yeo Un-hyeong (1886-1947).

The war over history in East Asia has seen no breakthrough for years.

Against this backdrop, the Korea JoongAng Daily met with Lim in his office recently to talk about his personal and professional journey, how he views the problems in contemporary Korean society and East Asia.

Below is an edited excerpt of the Korea JoongAng Daily’s recent interview with Lim.

Q. Although you learned of your grandfather’s socialist activism in your sophomore year, do you think he was an influence for you to become a historian studying Marxism? In the book, you said when you think of your grandfather your heart aches. What did you mean by that?

A. I guess we can say that I have some traits of his. Since my elementary years, I have read the newspaper every day. I was interested in politics and social issues. But I have no memory of him. And not one of his possessions remains. Under the anti-Communist system in those years, he had to be erased.
And my heart aches not just thinking about him but thinking about his generation in general. They were intellectuals that anguished [over the future of the country], but found no home in the South or the North. Even after independence [from Japan], they lived in oppression amidst the Cold War, trapped in the southern tip of the Korean peninsula.
Ironically, it seems he was freer during the Japanese colonization. He was adventurous, traveling to Japan, China and the Soviet Union, speaking Japanese and English. What is important about the physical space that you live in is that it also defines the dimensions of your reason.

Q. It’s been 18 years since you published “Beyond Nationalism” and rattled Korean academia. Has the history community in South Korea changed since then?

A. In Korea, the “national history” paradigm is still dominant. But young historians are showing signs of change.
For instance, in 2002 when China began claiming that the history of Goguryeo is China’s national history, I suggested at an international conference the following year the [idea of] “border history.” It’s an argument that the modern concept of borders doesn’t apply to ancient history and that Goguryeo existed in the “border zone,” which is a “hybrid zone” in which Korean culture, Chinese culture, inland culture and marine culture all overlapped. In that sense, the argument says that Goguryeo is neither Korea’s history nor China’s - it’s Goguryeo’s history. Historians then protested.
Some said I am selling out Goguryeo to China. Others said while China is strongly armed with nationalism, we shouldn’t be disarming. However, today there are young historians who are studying border history. They are not yet mainstream historians.
Also when there was the recent controversy over where China’s Four Commanderies of Han were located, a change was detected. Some historians claimed that the Han Commanderies was outside Apnok River that is in today’s border between North Korea and China’s Northeastern region. In history there is the terminology describing this approach - autochthonous. It’s the approach that allows no foreign enclave within the borders of the current nation-state. But some young historians criticized them, which can be seen as signs of change.

Q. Can your “mass dictatorship” paradigm explain what’s going on in the U.S. and Korea now?

A. There are mechanisms of mass dictatorship. For instance, after the 9/11 terrorist attack, the U.S. endorses the use of torture when there is an absolute need in order to get confessions from terrorists. It’s also the same with President Donald Trump’s policies regarding immigrants. And this is a mechanism of mass dictatorship, because the public supports this.
Also, people voted for Park Geun-hye because of their nostalgia for the era of Park Chung Hee’s development-driven dictatorial rule. At that time, everyone landed jobs and they had job security for life. But with neoliberalism and globalism, people lost that security in their lives. This, too, can be seen as mass dictatorship at work.
Mass dictatorship is not about the small number of powerful people oppressing the masses with their power. Rather it’s about people reading the masses’ desires and ambitions and using the tools or policies that satisfy them, or at least appear to satisfy them, convince them it’s the system for them, and gathering the power of the masses to oppress the minority.
Hitler was supported by the people. So were Mussolini and Park Chung Hee. What is interesting about the current political scene is that the masses who supported Park Geun-hye have turned their backs. The masses, when their certain expectation is not met, can turn their back and become opponents any time. Otherwise, mass dictatorship would go on forever. People are not consistent. They walk a crooked line. So does history. It’s not linear.

Q. In your book, you shared your plans on writing further about the “victimhood nationalism” paradigm you came up with in 2007. Tell us more.

A. It was derived from Zygmunt Bauman’s (1927-2017) “Hereditary Victimhood” idea. When I was interviewing him in December of 2002 at his home in Leeds, England, he showed me the draft of his dissertation on hereditary victimhood. There is a lot of research done on the Holocaust, so I often get inspiration from them.
In 2007, newspaper headlines criticized “So Far from the Bamaboo Grove,” [in which a young Japanese girl recollects her family’s return to Japan from Korea after Japan’s defeat in World War II and a Korean is described as an aggressor]. Koreans were deeply disturbed as in the book the dichotomy that the Japanese are the aggressor and the Koreans are the victims is shaken.
But political collaborators who were cooperative to Japan’s colonial rule and economic collaborators who made fortunes from [Japan’s projects] in Manchuria and the South Seas cannot be seen as the victims of history because they were the people of Joseon. In the same way, antiwar pacifists in Japan who died in America’s indiscriminate bombing and atomic bombing cannot be seen as the aggressors of history because they were Japanese.
It may be too much to ask the survivors of extreme situations like the Holocaust not to settle in the moral justification that the position of victim gives and be introspective. What is more problematic is that even the postwar generation, who didn’t experience the Holocaust or colonization, consider themselves victims as a result of collective memory.