[News] Alexievich's goals is to give everyone a voice: Nobel laureate speaks about the victims of war and their stories > CGSI in the Media 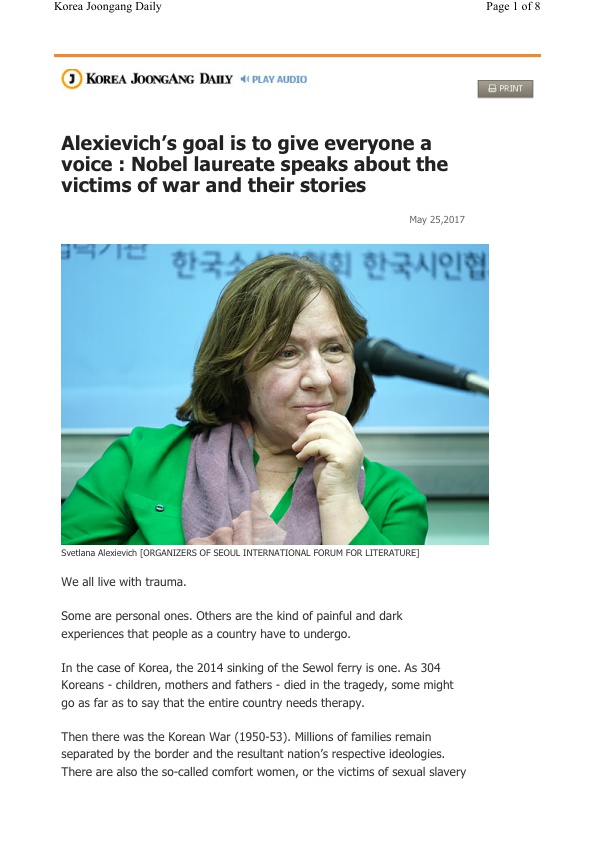 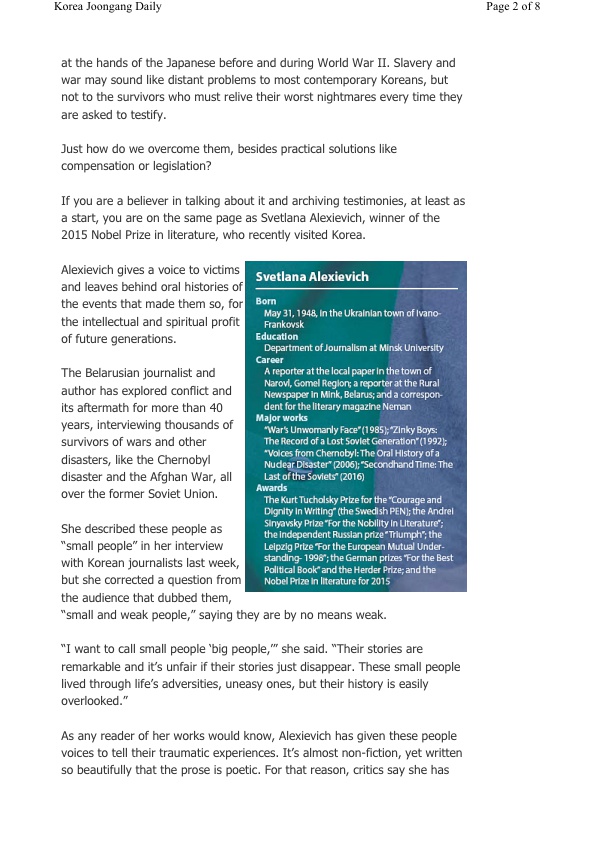 We all live with trauma.

Some are personal ones. Others are the kind of painful and dark experiences that people as a country have to undergo.

In the case of Korea, the 2014 sinking of the Sewol ferry is one. As 304 Koreans - children, mothers and fathers - died in the tragedy, some might go as far as to say that the entire country needs therapy.

Then there was the Korean War (1950-53). Millions of families remain separated by the border and the resultant nation’s respective ideologies. There are also the so-called comfort women, or the victims of sexual slavery at the hands of the Japanese before and during World War II. Slavery and war may sound like distant problems to most contemporary Koreans, but not to the survivors who must relive their worst nightmares every time they are asked to testify.

Just how do we overcome them, besides practical solutions like compensation or legislation?

If you are a believer in talking about it and archiving testimonies, at least as a start, you are on the same page as Svetlana Alexievich, winner of the 2015 Nobel Prize in literature, who recently visited Korea.

Alexievich gives a voice to victims and leaves behind oral histories of the events that made them so, for the intellectual and spiritual profit of future generations.

The Belarusian journalist and author has explored conflict and its aftermath for more than 40 years, interviewing thousands of survivors of wars and other disasters, like the Chernobyl disaster and the Afghan War, all over the former Soviet Union.

She described these people as “small people” in her interview with Korean journalists last week, but she corrected a question from the audience that dubbed them, “small and weak people,” saying they are by no means weak.

“I want to call small people ‘big people,’” she said. “Their stories are remarkable and it’s unfair if their stories just disappear. These small people lived through life’s adversities, uneasy ones, but their history is easily overlooked.”

As any reader of her works would know, Alexievich has given these people voices to tell their traumatic experiences. It’s almost non-fiction, yet written so beautifully that the prose is poetic. For that reason, critics say she has created a new literary genre. They call this the “genre of actual human voices and confessions,” or “novels of voices.”

Her writings are “a monument to the suffering and courage in our time,” the judges of the Swedish Academy said upon awarding her the Nobel Prize in 2015. “It’s not really a history of events. It’s a history of emotions… She’s offering us a history of a human being about whom we didn’t know that much.”

This is her first trip to Korea, which, given its tumultuous history, really can learn something from her work, with its many survivors and witnesses of unthinkable conflicts and disasters. She visited Korea to attend the “Seoul International Forum for Literature,” held for three days from Tuesday and hosted by the Daesan Foundation and Arts Council Korea every five to six years.

Below is an edited excerpt from her interview with Korean media on Friday, as well as her remarks from the Seoul National University and Sogang University, in which she attempted to give Korea much-needed guidance on overcoming conflict and the wounds victims feel as individuals and as a country.

Q. Tell us how you created the literary non-fiction genre “novels of voices.”

A. I grew up in the countryside, in a rural area in Belarus. There is a Slavic tradition where women would come out to the streets in the evening and talk about their lives. My grandparents as well as my parents were school teachers. There were many books in my house. But I just loved listening to the stories of these women rather than reading books. There were always voices that surrounded me. These voices I heard as a child hit me stronger than any other books could.
Also, my father had gone to the battlefield in 1919 and I heard many stories from my grandmother. I was so sad that these remarkable stories will go nowhere. These small people existed and shined but would disappear without a trace. That’s why I began going around, asking questions. But I am not a collector of painful information. What I am interested in is how people find strength to go on when things take a turn for the extreme and tragic. My biggest goal is to collect souls. I want to prove that humans are strong.

Q. You’ve interviewed thousands of people. Can you tell us the process of writing your books?

A. I interviewed 200 to 500 people for one book. It takes five to ten years to write one book. I never thought that what they tell me is the ultimate truth. Because of the limits of memories, their stories may be made up. So I listen as much as possible. It really isn’t easy to extract truth from the stories.
For instance, among the women who were at war, a woman who flew a plane and a woman who drove a tank may have a different perspective. A woman who served as a partisan would’ve seen the war from the viewpoint of a guerrilla. Part of it has to do with my intuition. Also, my personal views toward life and reality are reflected.
But my goal always is to break the set mold in the heads of my interviewees and induce them to think deeply about themselves and talk. I hope to help them tell their real stories, not the ones that must be told or the ones I want to hear.
I also just talk with my interviewees about their life. I don’t necessarily talk only about the wars or the Chernobyl incident. I talk with them about their daily lives, because I need to know not just the information they have, but who they are as human beings. In the pain of human beings, there is eternal information. It’s something that only they feel. That’s why I remove or reduce my own comments and narrative as much as possible.
I received many literary awards, not just the Nobel Prize, but I don’t attend the ceremonies as a great literary figure. I attend them as a witness of my contemporaries.

Q. Can you tell us about the most difficult interview you conducted?

A. I interviewed a Soviet woman who was serving as a partisan during World War II and was captured by German soldiers. According to her, for the German soldiers, killing a Soviet female had become boring. So they would resort to all kinds of brutal methods to kill them, as if they were boars. When I heard that story, I was so shocked. But the woman told me that that’s nothing compared to how Germans invaded the Soviet Union and burned children and their mothers to death.
No one can be beautiful during wartime. Because of the remnants of the propaganda during the Soviet Union period, even during the post-Soviet times some argue that weapons and people are all beautiful. I cannot agree. War is an act of murder.

Q. Can you tell us more about your views on war and how you came to write “War’s Unwomanly Face” (1985)?

A. I heard about deaths since I was young. When you grow up listening about deaths, the world is not bright and beautiful. That’s why I wrote “War’s Unwomanly Face,” to be liberated from the pain. It’s painful to live listening about wars and deaths all the time.
I also wrote about wars because I wanted to remove all the flowery language about wars. I wanted to tell that war is killing. It hit me that I should really write about wars and women in my first interview for “War’s Unwomanly Face.” I interviewed a woman who was at war as a nurse. Her job was to find people who were alive amidst piles of corpses. She told me she was looking at dead soldiers laid on the ground. She said there were handsome Russian soldiers and there were handsome German soldiers. It’s sad and heartbreaking for both Russian soldiers and German soldiers. That’s the view of women toward war. Women’s descriptions of wars are different. They use different words, scents and colors.
Many newspapers say there could be a third world war, but this is dangerous. When you keep thinking about it, it could easily be a reality. When I went to Afghanistan, I was so happy to be in such beautiful nature. Afghanistan has remarkable mountains and other natural elements. Against that background, there are tanks and camels carrying piles of weaponry. This is ridiculous. We must do everything we can so that mankind does not undergo such a trying period. We shouldn’t be killing people, but ideologies. We should be debating, instead.

Q. Three years ago, Koreans experienced the sinking of the Sewol ferry. No prominent literary works came out of the incident. What are your thoughts?

A. Authors write about things they want subjectively, from their personal views. It’s regrettable that no literary works emerged that deal with the Sewol tragedy. But it’s not easy to tackle a tragic theme. But besides the journalistic approach, one can resort to the sociological method, or even a sacred approach like a clergyman. It’s difficult, but if people must write about the Sewol ferry I think they should position themselves somewhat like a philosopher, so that it doesn’t come out as a predictable event. For the seven years I worked as a journalist after graduating from university, I made sure that I was not overloaded with daily responsibilities. It was because I needed a lot of time so that I could approach an incident not superficially, but with depth.

Q. How are your writings so poetic? Do you have a background in poetry?

A. I didn’t want to deliver just the horrible situations. I also wanted literary expressions in my works. Horrible events already occur too much in our lives. My goal is to help people’s spirits and minds get stronger. I attempt to deliver aesthetic elements in my work too.
I wanted to make an artistic encyclopedia of the so-called utopian period of history. The reason I write in Russian, although I am a Belarusian, is because the term “utopia” was created in Russian. I thought to myself, let’s bring all the people together and create a tragic chorus. That was my idea. “Chorus” is a Greek term. It takes place with grandeur and solemnity before something begins.
My father lived until he was 90 years old and he was a communist until his final moment. But he was a good man, and he loved life. My goal is to give a voice to communists, Democrats, young boys, old men and help them shout and create a chorus.